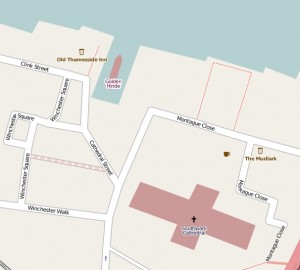 Or, to give it its full name, An Act for the more effectual relief of creditors in cases of escapes, and for preventing abuses in prisons, and pretended privileged places. (Anno 8 & 9 William III cap 27)

This very important law requires lengthy analysis, covering as it does prisons, sanctuaries, escapes, and the debtors involved in all three. Suffice for the moment to point out that the act signaled the reconquering of the lawless areas by the newly-minted Williamite state, reform of the houses of detention and enforcement of commercial and financial contracts. Here, I shall take a preliminary look at just one part, not even a whole sentence, but the list of ‘pretended privileged places’ in §15:

Firstly, to clear up some confusion: there are ten places listed, two of which have nicknames (Montague Close is also known as the Minories, Clink as Deadman’s Place), and Fuller’s Rents is a different place to Fulwoods Rents. These errors may stem from the 1911 Encyclopaedia, available online and used for a base by wikipedia by virtue of being out of copyright.

This does not list all the anomalous areas in London, but only those that had gone ‘wild’, that is, were being actively used to escape the law. (This does not preclude other areas being refuges of some sort.) Of the ten places ennumerated, three are transpontine, being in close proximity in Southwark: Montague Close, the Mint and the Clink. One, The Savoy, is nominally in the City of Westminster, but under the jurisdiction of the Palatinate of Lancaster. Baldwin’s Gardens was in the Parish of St Andrew, Holborn, outside the City of London.

The remaining five are all to be found in Farringdon Ward Without, outside the walls of the City of London, but part of it administratively. Whitefriars is, of course, Alsatia proper; Fuller’s Rents are to the west, in the Temple, between Fleet Street and Kings Bench Walk; Mitre Court and Ram Alley also in the Temple, Salisbury Court just a little way along to the east, before one reaches the Bridewell. The precise locations of these areas have still to be determined – modern street names are a very poor guide, and there have been numerous Mitre Places in London.

The wild sanctuaries then are all outside the City walls, even though there were a number of sanctuaries within them prior to the reformation (Saint Martin Le Grand for example). Around Whitefriars and the South Bank are where they are concentrated, and the Savoy is also close to the river. Baldwin’s Gardens looks quite anomalous geographically.

In following posts, I will discuss each of these places individually, and hopefully produce a map showing as clearly as possible their locations and extent.

I will put the full text of this law online eventually; until then, it can be read at British History Online, alas, without punctuation. This may also explain the taking of nicknames as separate places. Such statutes aren’t easy to read at the best of times, but really!