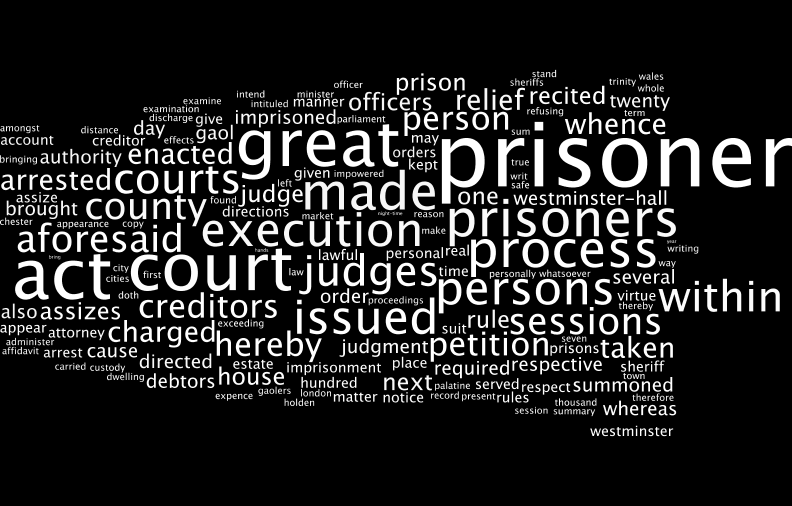 1730: 3 Geo 2 c.27: An act for explaining and amending an act made in the last session of parliament intituled, An act for the relief of debtors with respect to the imprisonment of their persons.

II.    And it is hereby further enacted, That upon such petition made by any prisoner or prisoners to any of the said courts from whence the process issued, such court is hereby required to make a rule to cause the prisoner or prisoners to be brought, at an expence not exceeding twelve pence a mile, to be paid to the officers out of the effects of the prisoner, and in case the prisoner has not sufficient effects, then to be repaid by the treasurer of the county out of the county stock, to the next assizes to be holden for the county or place where he, she or they shall be imprisoned, if the same shall be within that part of Great Britain called England, and if within the principality of Wales or county palatine of Chester, then such prisoner or prisoners shall be brought to the next great sessions to be holden for the county where he, she or they shall be imprisoned; and the several creditors at whose suit such prisoner or prisoners shall stand charged as aforesaid, shall also be summoned to appear at the said next assizes or great sessions personally, or by his, her or their attorney or attorneys, by rule or order of the court from whence the process issued, to be served on such creditor or creditors, or to be left at his, her or their dwelling-house or usual place of abode, thirty days at the least before such assizes or great sessions.

IV.    And it is hereby further enacted, That the judges of the great sessions in Wales, and the judges of the county palatine of Chester, within their respective jurisdictions, shall and they hereby have the same cognizance, power, authority and jurisdiction for the relief of debtors, with respect to the imprisonment of their persons, who shall be imprisoned within their respective precincts, by virtue of any execution to be issued out of their respective courts, and to proceed in the same manner concerning the discharge of such debtor or debtors, and to give the same judgment, relief and directions relating thereto, as the said courts in Westminster hall are impowered and directed to do by the said herein before recited act.

V.    And whereas divers rules or orders may have been made by the Courts of law in Westminster-Hall for the bringing up of prisoners, pursuant to the said recited act, from prisons at great distance from the cities of London and Westminster, which have not been obeyed by the respective sheriffs or gaolers in whose custody such prisoner or prisoners then were, by reason of the great expence attending the same; be it enacted by the authority aforesaid, That all such rules or orders as have been made by any of the courts in Westminster-Hall, for bringing up of such prisoners to any such courts, and all attachments and proceedings thereon, be and the same are hereby discharged and made void; and that all sheriffs and gaolers be and are hereby protected and indemnified against all actions that are or shall be brought against them, or any of them, for not obeying such rules or orders.

VI.    And whereas by the said recited act the officers are restrained from carrying any person or persons by them arrested to any gaol or prison within twenty-four hours from the time of such arrest; and several persons, who have been arrested, refusing to be carried by the officers to any house whatsoever, to be kept in safe custody during that time, have kept the officers abroad with them in the night-time, and thereby have found means to make their escapes from such officers: be it therefore enacted by the authority aforesaid, That if any person or persons, after the first day of Trinity Term next, shall be arrested or in custody of any sheriff, under sheriff, bailiff, serjeant at mace or other officer or minister whatsoever, by virtue of any writ, process or warrant, and such person or persons so arrested shall refuse to be carried to some safe and convenient dwelling house of his, her or their own nomination and appointment, so as such dwelling house shall be within a city or market town, in cafe such person or persons shall be there arrested, or, if such arrest shall be made out of any city or market town, then within three miles from the place where such arrest shall be made, and so as such house be not the house of the person arrested, provided it be within the same county and liberty, that then it shall and may be lawful to and for such sheriff or other officer or minister to convey or carry the person or persons so refusing to such gaol or prison, as he, she or they is or are liable to be sent to by virtue of such writ or process; any thing in the said recited act  to the contrary notwithstanding.