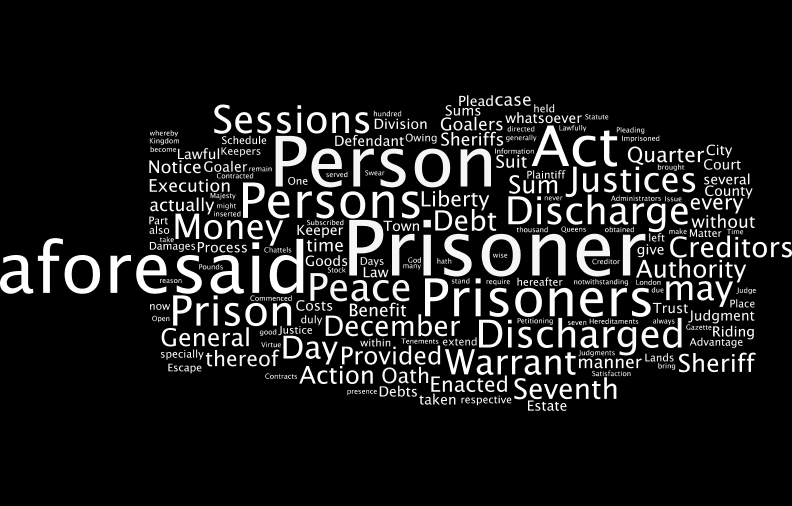 1712: 10 Anne c.20 / c.29: An Act for the Relief of Insolvent Debtors by obliging their Creditors to accept the utmost Satisfaction they are capable to make and restoring them to their Liberty.

Whereas many Persons now detained in Prison are reducd to very great Poverty and Necessities by many Losses and Misfortunes befallen them in their Trades and Professions during this Time of War as as they are become utterly disabled to satisfie and pay all their several Debts to their respective Creditors and by their long Continuance in Prison are rendred not only useless to the Government but both they and their Families are likely to be burthensome to the Nation if speedy Care be not taken to prevent the same Be it therefore Enacted by the Queens most Excellent Majesty by and with the Advice and Consent of the Lords Spiritual and Temporal, and Commons in this present Parliament Assembled, and by the Authority of the same, That all Persons, that, upon the Seventh Day of December, One thousand seven hundred and eleven, were, and from thence to the time of their being Discharged in manner as in herein after directed, shall Continue actually Prisoners upon any Mean Process, Execution, Escape, Warrant, Attachments, Outlawries, before or after Judgment, or any other Process whatsoever, issuing out of any Court of Law or Equity within this Kingdom, for Debt, Damages, or Costs, who shall take the Oath hereafter mentioned, shall and may be for ever Released and Discharged from their Imprisonment, in such manner as hereinafter is provided; (That is to say) It shall and my be Lawful for any Justice or Justices of the Peace of any County, Riding, Division, City, Town, or Liberty, within this Kingdom, upon the Petition of such Prisoner or Prisoners, by a Warrant under his or their Hands and Seals, to require the Sheriff or Sheriffs, Goaler or Goalers, or Keeper of any Prison, within his or their respective Jurisdiction, to bring before the Justices of the Peace at the Quarter or General Sessions, to be held next after the Expiration of Forty Days fromt he Date of the said Warrant, for such respective County, Riding, Division, City, Town, or Liberty, the Body of any Person being in Prison, as aforesaid, together with the Copy or Copies of the Cause or Causes which he, she, or they, is or are Charged with in the several Goals, as aforesaid, at the time aforesaid; which Warrant every such Sheriff, Goaler, or Keeper, is hereby Commanded to Obey: And such Prisoners coming before such Justices of the Peace at the said Sessions, shall, in Open Court, Subscribe and Deliver in a Schedule of his whole Estate, and of the Names of his several Creditors, and of the several Sums of Money to them respectively Secured or Owing, and make Oath or Swear to the effect following, (viz.)

I A.B. do, upon my Corporal Oath, in the presence of Almighty God, Solemnly Swear, Profess and Declare, That the Schedule now Delivered, and by me Subscribed, doth contain, to the best of my Knowledge and Remembrance, a Full, Just, True, and Perfect Account and Discovery of all the Estate, Goods, and Effects unto me any ways belonging, and such Debts as are to me Owing, or to any Person in Trust for me, and of all Securities and Contracts whereby any Money will or may hereafter become Payable, or any Benefit or Advantage accrues to me, or to my Use, or to any other Person or Persons in Trust for me: And that I or any other Person or Persons in Trust for me, have not Land, Money, Stock, or any other Estate, Real or Personal, in Possession, Reversion, or Remainder, of the Value of Ten Poounds: And that I have not directly or indirectly Sold, Lessened, or otherwise Conveyed, Disposed of, in Trust, or Concealed, all or any Part of my Lands, Money, Goods, Stock, Debts, Securities, Contracts, or Estate, whereby to Secure the same, to Receive or Expect any Profit or Advantage thereof, or to Defraud or Deceive any Creditor or Creditors, to whom I am Indebted, in any wise howsoever:
So help me God.

And which said Schedule being so Subscribed in the presence of the Justices, in Open Court and Sessions, as aforesaid, is to remain with the Clerk of the Peace, for the better Information of all the Creditors of such Prisoners.

And be it further Enacted by the Authority aforesaid, That the Justice or Justices of the Peace, who shall Grant such Warrant or Warrants for bringing such Prisoner or Prisoners before the Justices of the Peace at the General or Quarter Sessions, shall give a Writing, Importing Notice to all the Creditors of such Prisoner or Prisoners, Petitioning, as aforesaid, under his Hand and Seal, That he hath Granted such Warrant, and that the Prisoner or Prisoners hath or have Petitioned to be Discharged; And the said Notice shall be left with or served upon the Person or Persons, his, her, or their Executors, Administrators, Attornies, or Agents, Lawfully Authorized, or left at the Dwelling House, or usual Place of Abode of the Person or Persons at whose Suit the Prisoner or Prisoners shall be Imprisoned; and Notice thereof shall be inserted in the London Gazette Thirty Days before such Quarter or General Sessions appointed by the said Warrant, so that as well the said Creditors as the said Prisoner or Prisoners may appear before the Justices at the Quarter or General Sessions of the Peace, to be held for the same County, Riding, Division, City, Town, or Liberty, as aforesaid; and in case it shall be proved upon Oath before the said Justices, That the said Notice was so served or left, as aforesaid, and Notice inserted in the London Gazette Thirty Days or more before the said Sessions, and that the said Person so Petitioning was actually a Prisoner, as aforesaid, upon the said Seventh Day of December, and shall have so continued to the time of such Sessions of the Peace, and the said Oath taken by the said Prisoner be not disproved by good Testimony of any Credible Person or Persons on Oath, to be Administered by the said Justices, Then the said Justices of the Peace in their said Sessions, or the major part of them, being satisfied therewith, shall thereupon, by their Warrant, Command the Sheriff or Sheriffs, Goaler or Goalers, or Keeper of any Prison, forthwith to set at Liberty such Prisoner, without paying or giving any Fee or Reward; which Warrant shall be a sufficient Discharge to the Sheriff or Sheriffs, Goalers or Keepers of any Prison, and shall indemnifie him or them against any Escape or Escapes, or Action or Actions whatsoever, which shall or may be Brought, Commenced, or Prosecuted against him or them, by reason thereof.

And be it further Enacted by the Authority aforesaid, That no Prisoners Discharged by this Act, shall, at any time hereafter, be Imprisoned by reason of any Judgment obtained, or any Debt, Damages, Costs, Sum or Sums of Money, Contracted, Owing, or Growing due before the said Seventh Day of December; but that upon every Arrest upon such Judgments, or for such Debts, Damages, Costs, Sum or Sums of Money, It shall and may be Lawful for any Judge of the Court whence the Process shall Issue, upon shewing a Duplicate of such Prisoners Discharge or Discharges, and the said Judge is hereby Impowered to Discharge out of Prison such Prisoner or Prisoners, as aforesaid, so as every such Prisoner Arrested or Detained upon mean Process, do give a Warrant or Attorney to Appear to every such Action, and to Plead thereunto.

And be it further enacted by the Authority aforesaid, That if any Sheriff or Sheriffs, Goalers or Keepers of any Prison, shall, without just Cause, Refuse or Delay to bring the Prisoner to the General or Quarter Sessions, in Order to his Discharge, or Detain the Prisoner after he or she shall be Discharged, as aforesaid, every such Sheriff of Sheriffs, Goalers or Keepers of any Prison, shall Forfeit and Pay the Prisoner the Sum of Ten Pounds, to be Recovered with Treble Costs of Suit, by Bill, Plaint, or Information, in any of the Courts at Westminster, where no Essoign, Protection, or Wager of Law, or more than One Imparlance shall be allowed.

And be it further Enacted by the Authority aforesaid, That if any Person shall wilfully Perjure him or her self in any the Matters aforesaid, and be thereof Lawfully Convicted, he or she shall, over and above the Penalties now in Force against Persons Committing wilful Perjury, be Committed to the house of Correction, there to remain for the space of Twelve Months without Bail or Mainprize, and be kept to Hard Labour during the said time.

And be it further Enacted by the Authority aforesaid, That if any Action of Escape, or any Suit or Action be brought against any Justice of the Peace, Sheriff, Goaler, or Keeper of any Prison, for performing of their Office in pursuance of this Act, they may Plead the General Issue, and give this Act in Evidence; and if the Plaintiff be Nonsuited, or Discontinue his Action, or Verdict pass against him, the Defendant to have Treble Cost.

Provided, That the Discharge of any Person, by Virtue of this Act, shall not Acquit any other from any Debt, Sum or Sums of Money, or any Part thereof, but that all others shall be answerable for the same, in such manner as they were before.

And Provided also, That nothing in this Act contained shall extend, or be construed to extend, to give any Benefit, Ease, Discharge, or Release, to any Person or Persons whatsoever, in any ways indebted to the Queens most Excellent Majesty, for or in respect of such Debt.

Provided always, That no Person or Persons shall have any Benefit of this Act, who shall stand indebted in more than the Sum of Fifty Pounds to any one Person, Principal Money and Interest.

Provided, That this Act shall not extend to that Part of Great Britain called Scotland.

Provided also, That no Person or Persons whatsoever, who shall not Obtain his, her, or their Discharge, pursuant to this Act, on or before the Twentieth Day of May, which shall be in the Year of our Lord, One thousand seven hundred and thirteen, shall have any Benefit or Advantage by this Act, or any thing therein contained, but such Person and Persons shall be continued in Prison, as if this Act had never been made.

Provided always, and be it further Enacted by the Authority aforesaid, That notwithstanding the Discharge of the Person of such Prisoner, as aforesaid, all and every Judgment and Judgments had and taken against him or her, shall stand, and be good and effectual in the Law, to all Intents and Purposes, against the Lands and Tenements, Hereditaments, Goods and Chattels only, of the said Prisoner so Discharged, as aforesaid; And that it shall and may be Lawful to and for such Creditor or Creditors of such Prisoner or Prisoners, so Discharged, as aforesaid, his or their Executors or Administrators, to take out any New Execution against the Lands, Tenements, Hereditaments, Goods and Chattels of such Prisoner or Prisoners (his or her wearing Apparel, Bedding for his or her Family, and Tools necessary for his or her Trade or Occupation, only Excepted) for the Satisfaction of his, her, or their said Debt, in such Sort, Manner, and Form, as he, she, or they, might have done, if the Person or Persons of such Prisoner or Prisoners had never been taken in Execution; Any Act, Statute, Law, or custom to the contrary in any wise notwithstanding.