‘Alsatia’ was not only a name for Whitefriars and a generic term for places outside the law, but also an example of a linguistic practice of ‘toponymic analogy’: bestowing a foreign place name upon a local area on the basis of presumed similarities. There are a significant number of examples of  this in the ‘Rogues’ cant’ of the early modern period, the slang probably spoken by the inhabitants of the such spaces, and the poorer sort in London generally.

I say ‘probably’, because our sources for this spoken language are invariably printed, meaning that what we know of it is mediated. Most lexicons of ‘the vulgar tongue’ such as that by Grose, were written by and for those who did not speak it. That such dictionaries frequently, and inaccurately, copied each other further confuses the issue. Those compiled by those involved in the justice system, whether J.P.s or criminals, may be more reliable. The literary evidence may be also be closer to the source. The vagabondage of travelling players and the number of authors prosecuted for debt connects the daily use and the artistic performance of cant. Whitefriars, and its near neighbour the liberty of Blackfriars, hosted some of London’s first theatres. But still, we cannot be sure what was poetic invention.

How much was this language used? A quick search shows that neither ‘ragamuffin‘ nor ‘Alsatia’ can be found in the materials hosted by either the Old Bailey Online or English Broadsides Ballads websites. ‘Punk‘ is used once in its slang sense in OBO (the other two uses are to refer to firewood and a surname), but is used in eleven ballads. Much more research is needed in this area.

The dictionaries reveal  a concern that language could be dangerous, especially when spoken by the dangerous classes. One of the earliest, A Caveat or Warning for Common Cursetors (1567) by sometime Whitefriars resident Thomas Harman, had as its explicit purpose the exposure of roguery, so that the “indecent doleful dealing and execrable exercises may appear to all as it were in a glass, that thereby the Justices and Sheriffs may in their circuits, be more vigilant to punish these malefactors[.]” By translating their language, their plots and schemes are revealed. This connecting of disorder with language was an important theme in the early modern period. John Locke devoted two chapters of his Essay Concerning Human Understanding to the imperfections and abuses of words, and another to remedying them. Abused words were a concern of Locke’s in the monetary debates of the 1690s, a matter that very much concerned debtors and creditors, stating that money was “thought to be a great Mystery” but only because “interested people …. wrap up the secret they make advantage of in mystical, obscure and unintelligible ways of Talking[.]” (Some Considerations) In the early eighteenth century, Jonathan Swift railed against ‘playhouse and Alsatia cant‘, making a clear connection between roguery and the theatre, as a corruption of both language and christianity. (See also Tale of a Tub.)

This language was as disordered and outside social norms as the sanctuaries and their inhabitants. The practice of renaming one place after another can be seen as a particular canting practice, that by confusing different places and drawing sardonic parallels embodies roguery. Toponymic analogy generally renamed dangerous localities with overseas names, generally one that was exotic, distant and with perilous resonances. For example, Wapping, site of the last, and shortest-lasting, sanctuary, was known as ‘Little Barbary.’ On the other side of the Thames, South London – specifically Lambeth, Southwark and Rotherhithe – was known as the ‘Turkish Shore.’ An exception to this is Newcastle, nicknamed the ‘Black Indies’ after the “rich coal mines prove an Indies to the proprietors”, according to Grose. Fortune-making replaces insecurity, but perhaps a sense of hazard lurks behind it.

For Whitefriars, the Alsace region was a suitable parallel in three ways. It was contested, first by the French and the Habsburgs then later between the French and Germans; ravaged during the Thirty Years War; and to some extent autonomous due to the tortuous treaties negotiated around it and the independence of some of its towns. ‘Alsatia the Lower‘ was also used to refer to Southwark Mint.

Other parts of London were similarly renamed. The area around St Martins In The Fields and Chandos Street was known as the Carribees from, says Thornbury, its “countless straits and intricate thieves’ passages.” Grose has this as the origin of ‘Cribbys‘:

Blind alleys, courts, or bye-ways; perhaps from the houses built there being cribbed out of the common way or passage; and islands, from the similarity of sound to the Caribbee Islands.

Similarly, ‘The Bermudas’ was used for the area around Drury Lane to signify difficult navigation, and perhaps also to it being a place of refuge for debtors, just as the actual Islands were a destination for them. Grose claims it was used indiscriminately of all sanctuaries, but Partridge disagrees. Ben Jonson refers to them twice, in Bartholomew Fair as ‘where the quarrelling lesson is read’, and The Devil is an Ass:

But, these same Citizens, they are such sharks!
There’s an old Debt of forty, I ga’ my word
For one is run away, to the Bermudas,
And he will hook in that, or he wi’ not do.

Newgate prison had a cell reserved for debtors called Tangier, perhaps drawing a sardonic parallel with the pirates of the barbary coast, on account of their holding captives for ransom, just as debtors were held until they could pay their debts, or referring to the unwholesome air and general poor hygiene. The inmates were nicknamed Tangerines. There may also have been a Tangiers Tavern nearby, where the famed and dashing highwayman Claude Duval lay in state after his execution; but all the references I have found to it have been in connection with this moment, so it may be an oft-repeated embellishment.

This type of renaming is also found outside London, though the only examples I have found date to the nineteenth century. In Wolverhampton there was an area inhabited by Irish migrants and worked by prostitutes known as The Caribees. In Merthyr Tydfil (all roads lead to Merthyr) there was a notoriously lawless district called ‘China‘, possibly named so at the time of the first opium war.

This practice goes on today: Anna Minton reports that a poverty-stricken area of Edinburgh is known as ‘Bosnia.’ (Minton, Ground Control, p.111.) 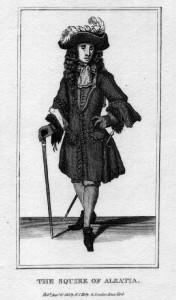