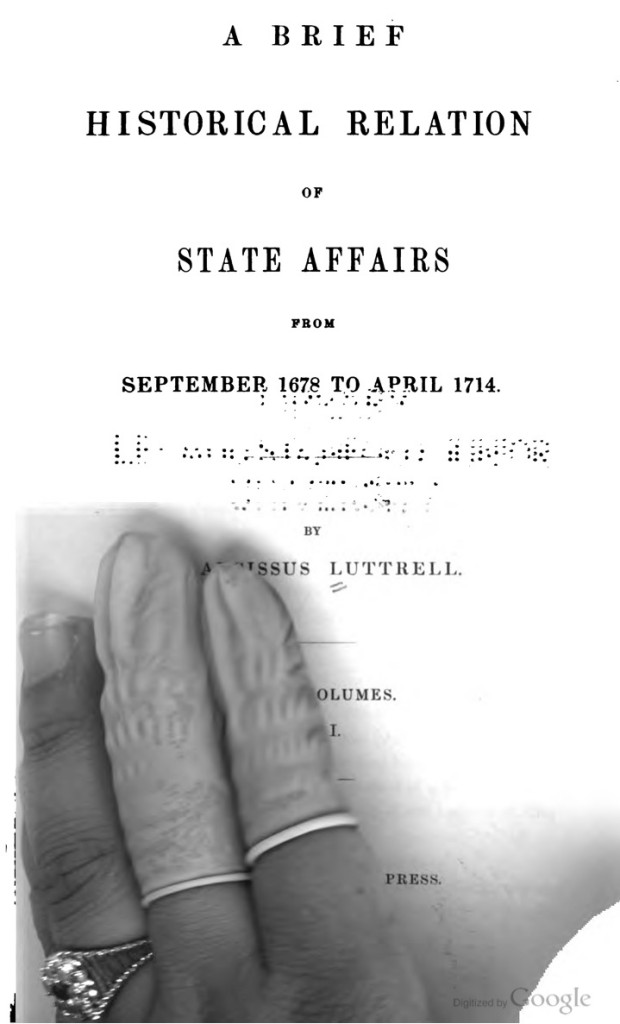 I’ve previously commented on some of the difficulties with the voluminous digital archives available on the web. Google Books and archive.org offer an extraordinary amount of material, but the curation – meaning the organization and metadata – is often deficient. Finding a complete series of a publication, or just a specific volume, is far more difficult than it should be; choosing the best digitization from the many copies turns the labyrinth into a maze.

Sifting and sorting  documents is part and parcel of the historian’s task. I hope that sharing the results will become standard practice too, for not only does a gift produce a rosy glow, but it prevents an arduous task being repeated.

This post is the first of three such siftings, dealing with Narcissus Luttrell’s Brief Historical Relation of State Affairs. (Also sifted are The Harleian Miscellany and The Statutes At Large.) Luttrell was a minor political figure, being an MP twice, a JP. His posthumous importance is due to his book collecting and political diary-keeping, the Brief Historical Relation…., first published very posthumously in 1857, being a product of both.

It is a somewhat chaotic compilation of news from home and abroad, jumbling up accounts of military campaigns, political manoeuvres, criminal charges and births, deaths and marriages. One thing follows another, the only connection being the date. A single page carries news of the Ottoman Empire and Flanders, the sailing of the West India fleet, a patent for the preservation of “fish or foul a considerable time after ’tis killed”, a bookseller sent to Newgate for publishing libels, and more besides. But it gives a sense of the great business of government, sometimes has information unavailable elsewhere, and is useful for establishing chronologies.

I’ve put links to both the Archive.org and Google Books versions as each has its own advantages. Google has more reliable search and better OCR, but Archive.org offers more formats and has a better online presentation. I hope I have found the cleanest and clearest versions, but cannot say I’ve checked every page.

Continuing the search for documents about Captain Francis Winter, leader of the Alsatians in the riot against the Templars, here are extracts from Narcissus Luttrell’s A Brief Historical Relation of State Affairs from September 1678 to April 1714. This  is an important chronicle of parliamentary affairs over 36 years, covering a great range of  ‘high governance’, including military reports, diplomatic negotiations and parliamentary debates.

There’s also frequent tallying of criminal trials and executions, amongst which we find that of Winter. The first extract gives a rather different account of the riot, giving details of two deaths but not that of the deputy John Chandler for which Winter was tried. It notes that ‘divers of the Alsatians’ were taken prisoner at the time, but no one else appears to have been prosecuted. Winter himself absconded, and was only captured two years later. There is also mention of Winter proclaiming the usurped King James II, a serious charge, but not one that I have found in any other record.

The question of why the Queen briefly reprieved Winter is left hanging, but other entries explain why the Queen had responsibility: William III was away fighting on the continent. “The King is at Breda” says the entry for 13th April 1693. Luttrell notes that the Mayor and Aldermen of the City pressed for the death sentence to be carried out; the riot was a terrible affront to them, and their rank and weight surely damned any possibility of clemency.

Text in the public domain, taken from volumes 2 and 3 of Luttrell’s A Brief Historical Relation at archive.org. Spelling as was, in all its irregular glory.

1st July 1691: The benchers of the Inner Temple, having given orders for bricking up their little gate leading into Whitefryars, and their workmen being at work thereon, the Alsatians came and pull’d it down as they built it up: whereupon the sherifs were desired to keep the peace, and accordingly came, the 4th, with their officers; but the Alsatians fell upon them, and knockt several of them down, and shott many guns amongst them, wounded several, two of which are since dead; a Dutch soldier passing by was shott thro’ the neck, and a woman into the mouth; sir Francis Child himself, one of the sherifs, was knockt down, and part of his gold chain taken away. The fray lasted several hours, but at last the Alsatians were reduced by the help of a body of the kings guards; divers of the Alsatians were seized and sent to prison. (Vol. 2, pp.259-260.)

27th April 1693: The sessions is now, where capt. Winter who headed the mob about 2 years since in White Fryars against the sheriffs of London, where 2 or 3 persons were killed, was found guilty of murder, and 2 persons swore at that time he proclaimed king James. (Vol. 3, p.86.)

9th May 1693: 8 malefactors were yesterday executed at Tyburn; but Middleton, Martin, and Winter were reprieved; on which the lord mayor and aldermen this day agreed on an addresse to the queen to have them executed. (Vol. 3, p.95.)

18 May 1693: Capt. Winter was yesterday executed in Fleetstreet, opposite to White Fryars: he died very penitently; and after he was cut downe from the gibbet, he was put into a coffin, and interr’d this evening. (Vol. 3, pp.99-100.)