The major problem with the historical slang discussed in the previous post is that our main source for it, the canting vocabularies, cannot be taken as proof of what was actually voiced. Not only do contemporary dictionaries dramatically transform the aural into the written, but for these lexicons we cannot be sure that their terms were widely used, or even used at all, or that they had the meaning prescribed to them. Their motives, whether to titillate a reader or inform a magistrate, make them still more opaque, as does their cannibalizing, copying and  reuse, with all the slips and mistakes that introduces.

Consequently, one needs to find examples of use, preferably in material that hasn’t been ‘worked up’ for an audience. Although plays have been a useful source for cant phrases, and although there is a connection between the theatre players and vagabondage, they are at root artistic works intended to be performed publicly, quite contrary to the purposes of argot.

Criminal records, especially depositions and testimony, may be a more fruitful source for the spoken language of the time. For example, the extract below is taken from the Middlesex calendar of the sessions records, 1616:

Francis Bradshawe of St. Clement Danes, gentleman, brought to the Court for abusing John Blanksby and John Cawcatt, constables of the Duchy, when they came with a warrant to apprehend one Captain Stokes for suspicion of murder, by virtue of Mr. Michell’s warrant, “and when they commanded him in the Kinges Matles name to goe with them he would not but in scoffing manner willed them in the Kinges name to goe with him.” Committed for default of sureties and afterwards handed in bail until the next Sessions to Oliver Smith of St. Clement Danes, tailor, and Ralph Garrett of Holborn, gentleman, to be of good behaviour, and to do his best endeavour to apprehend the said Captain Stokes, who escaped by means of the said Francis “out of the Barmoodoes in Milforde Lane”

‘Barmoodoes’, ‘Bermudas’ in modern orthography*, was defined by Grose as “A cant name for certain places in London, privileged against arrests.” The modern lexiographer of slang Eric Partridge considers it to mean a specific area, around Drury Lane. Willey, in Brewer’s Dictionary of London Phrase and Fable (2009), combines both definitions, calling it “the name for certain no-go areas where criminals hid themselves away and the authorities were not inclined to pursue them. It was applied in particular to the lanes and passageways running near Drury Lane, and to parts of Southwark.” (p.40)**

But here it is used to refer to Milford Lane, running south from the Strand to the Thames, as can be seen from the map below. 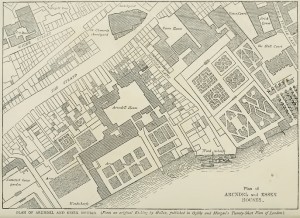 Milford Lane in the 17th century

Milford Lane wasn’t a sanctuary in the sense that it had any particular rights attached to it, as Whitefriars or Southwark Mint had. According to Thomas Powell‘s 1623 guide to the sanctuaries of London, it was held more or less by force of arms:

THe next is Milford lane, to which certaine Captaines and their companies being long since cashiered, betooke themselues, and liking the situation of it, did there erect diuers workes, both to the land-side and the water for their ensafing.

As they came in by conquest, so they hold it by the sword; and howsoeuer their title hath beene much disputed heretofore, yet they haue now commuted the matter, proued plantation, pretended the first discouery: and withall haue reduced it to a most absolute Hanse and free towne of it selfe without dependency.

Ben Jonson, who appears to have been the first to use Bermudas in this sense, in print at least, may well have been referring to Milford Lane in his poem Underwoods (published 1640), implying that the inhabitants were debtors turned pirates:

But these Men ever want: their very Trade
Is borrowing; that but stopt, they do invade
All as their Prize, turn Pyrates here at Land,
Ha’ their Bermudas, and their Streights i’ th’ Strand

So perhaps there was another resonance to the term Bermudas, as a haunt for pirates. Note that it was a Captain that was being pursued in the testimony above!

* A use of this spelling to mean the Bermudas proper, can be found in Horne’s 1666 Brief Description of the Province of Carolina.

** Interestingly, the Brewer’s Dictionary of 1894 gives a different meaning, although still referencing the alleys around Drury Lane and Covent Garden:

See also the undated edition at archive.org combining the cheapness motif with that of sanctuary.