For my second post on women in the Mint, I turn from fiction to data. The final clause of the Act against Southwark Mint offered an amnesty to those Minters, discharging debts below £50, albeit at the cost of “assigning all their estates and effects whatsoever, for the benefit of their creditors.” Some 6,254 people applied for this relief, their names, trade or status and parishes being published over 10 months in the London Gazette.

Whilst this sounds like a dream data set, there are a number of difficulties with it, aside from the sheer hard work of transcribing so many words from images of worn pages. Not every entry is complete. Some have extra details, such as aliases. Some information, such as familial connections and gender, cannot always be reliably deduced. Some of the applicants were probably ineligible for the amnesty; some may have known this, others not. Reading this archive requires forensic skill. Nevertheless, it is the only such source for any sanctuary, and offers a real chance to investigate the social composition of the Mint at the end of its existence.

So as a first step in analysing this data I have extracted the records of those I could identify as female. The first question is simply how many women were on the amnesty lists. The gender can be divined from two fields: forename and status. For the latter, many entries were of marital status, generally widow or spinster, very occasionally wife. Only in a handful of cases could I not work out the gender. 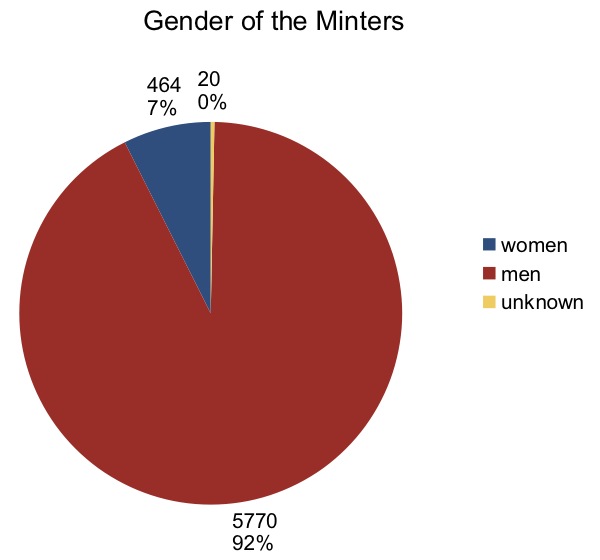 We can see that women were very much in the minority, but it is a significant minority that won’t be affected by resolving the gender of the unknowns. The next chart breaks the 464 women down by their status. 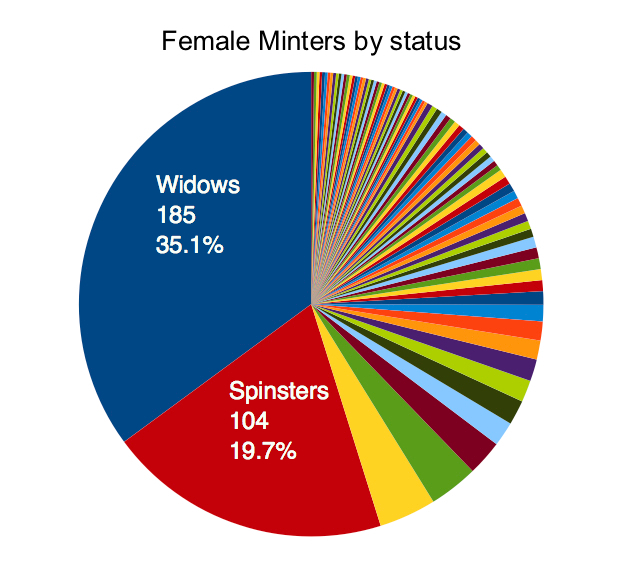 As some women gave their marital status, others a trade, in some cases both or two trades, the total number of pieces of information is 527. Although this introduces some complexity into the data-crunching, we can clearly see that the majority of women were either widowed or unmarried.

Following on from this, we can examine the professions the women practiced. In total, 84 different trades are given, which makes visualizing them in a pie chart rather difficult, so I have amalgamated all those with less than 4 respondants. 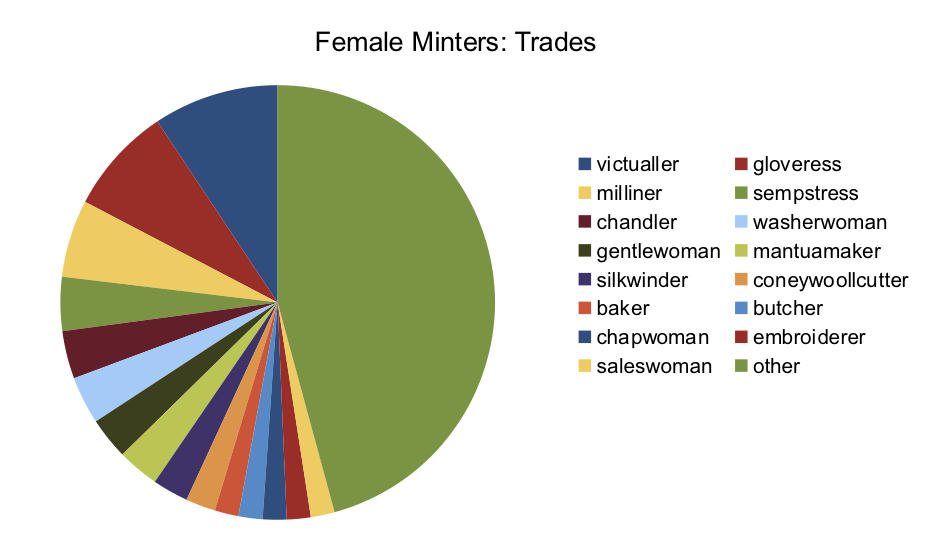 This is the least satisfactory of the charts as the trades should really be grouped together by sector: clothing, food, services, etc.

This data set can also be used for other investigations. Here is a pie chart of women’s first names, the most popular being at the top of the key. 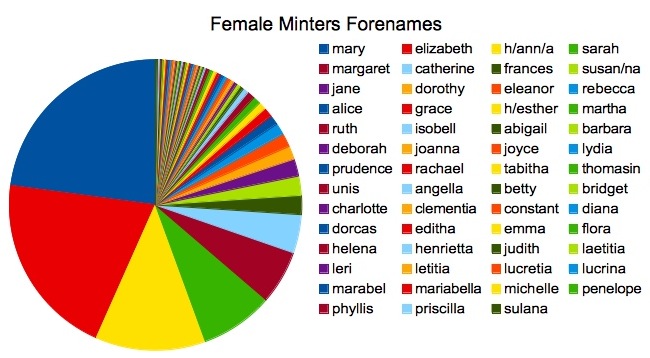 I’ve standardized spellings, combining variants such as Anne, Hannah and Anna into one group. As the chart shows, Mary (107) and Elizabeth (96) were by far the most common female names, and with Ann, Sarah, Margaret and Catherine account for over 75% of the total, with 49 other names making up the remainder. Of the 7 Gentlewomen on the lists 3 were called Mary and 1 Margaret, the others were Deborah, Henrietta and Charlotte. I had wondered whether there would be a noticeable difference between higher and lower class forenames, but the sample is inadequate for investigating this.

How accurate was Defoe’s portrayal of the Mint through the eyes of Moll Flanders? Firstly, I think he understated the number of female debtors. At a little over 7% they make up a sizable contingent, even if this is far from being equal to the number of men. And this is just the number of women applying for amnesty; there may have been others as well. Women are not a negligible presence in the Mint.

However, having Moll take on the role of widow, and having her find a friend in another widow, does reflect the marital status of many of the women. Why there were so many widows seeking sanctuary, and how they fell into debt, are very important questions. The number of spinsters also suggests that single women in general were particularly vulnerable to pursuit by their creditors.

These charts are my first attempt at sifting through the amnesty lists. They’re not really satisfactory, technically, statistically or historically. I’d like them to be more interactive, with statistics for each segment shown; there needs to be a way of coping better with those women that gave two professions or marital status and profession; and they need far more careful analysis. Nevertheless they give some indication of the composition of this debtor community, and the place of women within it.

3 replies on “The Women of Southwark Mint”